While the Cayan Library on SUNY Poly’s Utica campus may be the go-to for Ashley Paw during a typical semester, the junior majoring in Network and Computer Security traded in those familiar stacks this past fall for the impressive records of the Library of Congress in Washington, D.C.

It was just one of the many inspiring experiences Ashley enjoyed last autumn when she interned at the U.S. Securities and Exchange Commission’s Office of Public Affairs.

No stranger to life in a big city, Ashley, who is also minoring in computer science, grew up in the Bronx. A few summers of cyber security summer camp sponsored by the National Science Foundation and National Security Agency started the spark that quickly burned into a full-fledged interest in cyber security, giving her a desire for spending time in the nation’s capital. 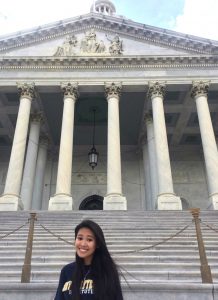 “The summer camp I went to took place in Washington, D.C., and it made me realize that I want to work for the government, so D.C. was the place to be. I’ve only worked my previous summers, and I already accepted a job offer for the summer, but I knew I needed something substantial to put on my resume so during my spring semester sophomore year, I started looking for internships for the Fall.”

It was not an easy task, but she knew the experience would easily be worth it. While some internship applications simply ask for a resume, cover letter, and transcript, Ashley was directed to various websites for each respective agency, with dozens of questionnaires, minimum 100 word answers, and other lengthy processes to complete. Determined to find her place in a U.S. agency, she worked hard through each section and form – her hard work paying off with offers from agencies that included the U.S. Census Bureau, Pretrial Services Agency, International Center for Missing and Exploited Children, and numerous private companies. One agency, however, stood out to Ashley above the rest.

“The U.S. Securities and Exchange Commission was the only agency that had a student-catered internship program. The Student Honors Program at the SEC allowed for a more focused student-intern experience, including networking events, brown-bag luncheons/talks, and mentoring.”

In the Office of Public Affairs for the Commission, Ashley primarily handled web development and social media analytics. However, her time there also allowed her to gain experience with contract proofreading, intranet design and upgrades, and photo and video shoots.

The  academic and hands-on experiences gained at SUNY Poly helped prepare Ashley with the relevant and necessary skills for her role in the professional workplace at the Commission. There, she put her knowledge gained in the classroom of network security and computer science to use while sharpening her skills in web development and data analytics. The valuable knowledge of her field of study at SUNY Poly teamed with the soft skills and experiences of classroom and campus life helped Ashley make the absolute most of her internship opportunities.

“My expectations were exponentially exceeded. I expected internships to consist of students running to get coffee and copying papers, but I was immersed in the daily job functions of the office and gained valuable experience.”

During her time interning in D.C., Ashley lived directly in the heart of Capitol Hill, one block from the Supreme Court and two blocks from the Capitol Building.

“Living in a house of 17 students-interns in one of the most culturally diverse cities never left me a minute to be bored. From the nightlife in Dupont Circle to the numerous Smithsonian museums and monuments on the National Mall, my housemates and I were always doing something when we were interning. Some of the events I’ve gone to were swing dancing in Baltimore, touring the Pentagon, seeing Neil deGrasse Tyson speak, going to a Nationals baseball game and visiting NPR studios. One of the things I’ll miss the most is studying and writing my papers at the Library of Congress. The Cayan Library on campus is pretty great, but being able to call the LoC my library was phenomenal. I was able to reunite with my summer camp friends from years past. It’s crazy to see that we were all in the DC metro area succeeding in the field that brought us together. I also curl for the SUNY Poly Curling Club and I was able to join the local curling club in Maryland, the Potomac Curling Club, for the semester and stay on top of my game. I reunited with two alumni opponents, one from Yale University and one from Rensselaer Polytechnic Institute that I played against my freshman year of college, and they showed me the works of the club.

“The biggest highlight for me overall during that time was going to the French Embassy’s Holiday Gala with my housemate, Sean. There were unlimited French desserts and hors d’oeuvres and there was a live band. It was such a good time.”

Any one of these experiences could easily be a highlight for someone’s semester, but for Ashley, one experience that stands out from her internship itself was when she was able to speak to the Director of the Office of Technical Services who oversees the digital forensics lab of the agency and spoke with her about the qualifications he looks for in his employees—and what she can do in the future to gain such skills.

“I want to go to graduate school for forensics, so it was very insightful to hear what he had to say.”

Not only did she gain these valuable career and life experiences thanks to the program through SUNY Washington Internship Program at the College of Brockport, but she also was able to receive college credit for the time she spent in D.C. And if there’s one piece of advice she would give to other students considering an internship, it’s to cast a wide net—apply to everything, even if you don’t feel extremely qualified.

“Employers aren’t solely looking for people with the most experience. They’re looking for candidates who are well-rounded and adaptable.”