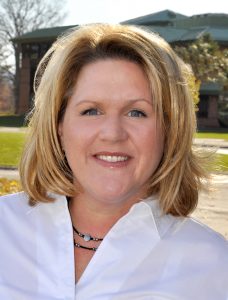 With 20 years of experience in the field of nursing, Assistant Professor of Nursing and Health Professions Jennifer Klimek Yingling is no stranger to the issues that students will face as they head out into careers in healthcare. Aside from preparing others for careers as nurse practitioners, Klimek Yingling still spends one day a week in the ER, keeping her skills in constant practice.

“I walk the walk. I feel as though if you’re going to teach it, then you have to do it,” she says. “Once a week, I’m in the emergency room at Faxton-St. Luke’s Healthcare. I think that it not only gives me some street cred, but it allows me to pull in real-life experiences for the students.”
Currently teaching Culminating Seminar for students pursuing their bachelor’s degree in nursing, Primary Care II for graduate students and Culminating Seminar for Nurse Practitioners—the class “that launches our Nurse Practitioners into the community, talking about legalities, licensure, etc.,” she says—Klimek Yingling has come a long way since the days when she was a student here.

“I have fond memories of SUNY Poly because I did my bachelor’s degree and master’s degree here as well as my certificate for advanced study,” she says. “So, I’m SUNY Poly squared, I like to say. It’s more than a job. It’s my life.”

A life engrossed in the field of nursing has allowed her to see quite a lot, putting many of her experiences and observations to work in a pilot study, the “Prevalence of Horizontal Violence in New York State Registered Nurses.” Horizontal Violence is the term used to describe hostility, criticism, sabotage, undermining, infighting and finger-pointing to co-workers. The study was published in the Journal of the New York State Nurses Association.

“This study was one of the first of its kind that talked about this issue,” Klimek Yingling says.

The nursing profession has changed tremendously over the past two decades that she has spent in the field, saying that when she finished her bachelor’s degree, there weren’t a lot of nurse practitioners in offices.

“Now there are nurse practitioners everywhere. It’s an exciting time for NPs now,” she says. “Nurses aren’t getting paid per patient in most cases, so they spend more time with patients. I think in the next ten years, you’re going to see a big change in the role of nurse practitioners and how we deliver healthcare in the U.S. And I think with the growth of our nursing program here at SUNY Poly, that’s really helping our community.”

With time spent both in the ER as well as in the classroom, she says that trying to choose one experience over the other is like comparing apples and oranges.

“It’s a different kind of love for both. I think the thing that draws me to both is the interaction. I love the student interaction. As nurses, we’re notorious for being helpers and fixers. I really enjoy helping the students and assisting them. It’s just about what the students do, but creating great healthcare providers that take care of you, me, and our community. It’s great to see them do well.”

Considering the field of nursing to be a very stable career, Klimek Yingling says the applications for the skills learned in the nurse practitioner program can be applied across many different fields, citing insurance companies, administration, and education as just some of the options that could await students.

“I don’t foresee a time when a computer or robot is going to be able to take over these jobs and care for people because it’s so much more than mere physical motions,” she says. “It’s the care and the emotion. We deliver medical care, but also have that holistic part, looking at that patient as a whole, listening and talking with them.”

Twenty years in, she says she’s still happy with the decision she made to enter the nursing field, saying that saying that it allows someone to make positive change every day they go to work.

“It’s making a difference in other’s lives, even it’s just a kind word, there is a connection you get with your patients. People don’t wear badges about their feelings, so when they’re scared their cancer came back, if they’re upset because they had a bad experience at another healthcare facility, the nurse practitioners are there to talk with them through those emotions,” she says. “Being able to make it a little better for them, you make a connection and it is extremely satisfying. You feel like you’ve done something good. It’s been my philosophy to always work hard for my patients so that when I put my head on my pillow, I know that I did everything I could for them.”

Tell us Your Story