Tanzid Sultan can usually be found curled up at the Peter Cayan library or somewhere else on campus, reading something related to physics.

His interest in physics began in high school, but he never believed it was a field that he would devote his life to. Instead, he was encouraged to study engineering. When he started at SUNY Poly as an Electrical Engineering major, he found his enthusiasm for the subject lacking and decided a change was in order. Adding applied mathematics as a second major and taking physics courses, Tanzid began to discover his passion.

“I realized that if I went into engineering it wouldn’t be fulfilling for me. It’s fun, you get to do some incredible things, but ultimately, theoretical physics is what I’m best suited for.”

Tanzid has taken every physics course offered at SUNY Poly, worked on six student projects, and spends his free time trying to learn as much about theoretical physics as possible. After taking a course in vector tensor calculus, he did what many students might consider unimaginable: he spent his summer in the library reading and learning even more about theoretical physics.

“Right now I’ve almost reached a point where physics has become a hobby. I don’t even care whether I’m studying, doing material for a class–the only thing I care about is whether I’m learning enough or whether it’s fueling my intellectual curiosity. That’s it.”

His greatest inspiration comes from none other than the scientist who introduced the concept of general relativity to modern physics – Albert Einstein. And much like the man inspiring him, Tanzid dreams of making a contribution to the physics.

“It doesn’t matter how little it is, if I can do that one day I’d consider myself a success.”  Einstein might have even been proud or encouraging of the decisions Tanzid made to continue studying physics. “I was interested in knowing what it was that he did, how he did it. It was very inspirational for me, in a sense. That’s one of the reasons I became obsessed with it, spending all semester, sitting in the library trying to learn general relativity.”

Tanzid’s dedication and hard work to pursue his passion for physics resulted in an invitation to join the Theoretical Physics PhD program at the University of Minnesota with a research fellowship and scholarship. The university boasts of a large physics department with a wide variety of fields: condensed matter physics, elementary particles, astrophysics, and high energy physics to name a few. Tanzid was also accepted to NYU, Stony Brook, and Tufts.

SUNY Poly faculty Dr. Andrea Dziubek and Dr. Amir Fariborz say Tanzid was quite lucky to get so deep into physics while at SUNY Poly, as there is no formal physics program other than classes within (and beyond) the physics minor. However, there is a small number of top students enrolled in the courses which allows for flexibility, including the allowance for faculty and student year-long projects.

“The year-long projects take them far beyond the level of standard textbooks. Far beyond. And touch grad level work,” said Dr. Fariborz. “Tanzid has completed six projects. So when you print those six projects they look like a master’s thesis.” 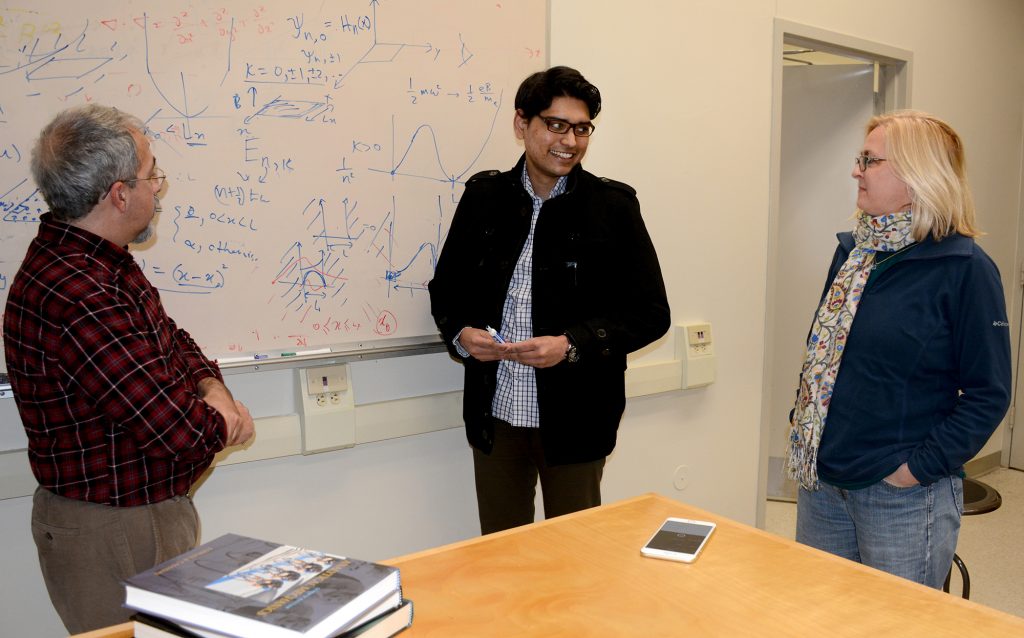 At one point Tanzid had felt studying physics under a math major at SUNY Poly may have been a disadvantage, but Dr. Dziubek rejects that notion.

“He said maybe it was a disadvantage to be studying without a formal physics degree program at SUNY Poly, but I would like to hear how that statement sounds five years later because he will realize he actually got a lot from here because of the faculty and how they are involved with the students,” Dr. Dziubek said.

For Tanzid, it turned out this could not have been a more perfect environment to flourish in: the freedom, flexibility, and faculty mentorship to study as much about physics as he desired despite the lack of an official program.

“In a way, a lack of resources has turned into an advantage here,” Dr. Fariborz said. “People joke with me and say you are running a hidden, underground graduate program, which in a way is true because even though his undergrad background is not in physics, the University of Minnesota has given him the responsibility to lead his own undergrad research. One can compare the situation here with a phenomenon known in physics as vacuum fluctuation, meaning something can pop out of a vacuum. In other words, you can get something out of nothing.”