UTICA, N.Y. – Helping to carry on the tradition of excellent food, customer service and dedication to the culinary side of his Lebanese heritage, Elias Zeina, ’17, ’19, credits his education at SUNY Poly as being the “fuel to the fire” to take his family’s business to the next level.

Zeina’s Café, opened in 2010 by Elias’ parents Albert and Layla Zeina, began with outstanding food that is unique to the area, but also had minimal advertising and social media presence. At the same time, while Elias was still a high school student in the New Hartford Central School District when the restaurant opened, he was always around to help his parents, yet an interest in the foodservice business had not developed. 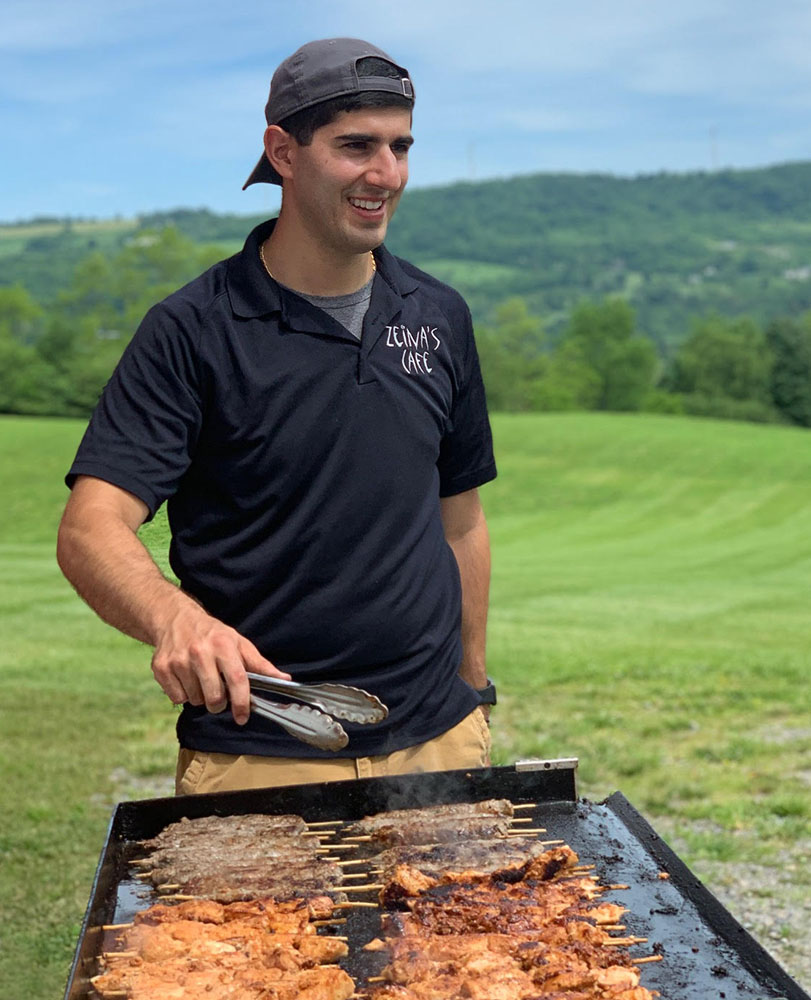 “I started washing dishes, waiting tables, I was doing a little bit of everything,” he said. “I wasn’t a great high school student and pretty much going nowhere academically.”

But after graduating from high school, Elias decided to enroll at Mohawk Valley Community College (MVCC) in order to continue his education and stay close to home to help his parents with their business.

Torn between pursuing a bachelor’s degree at SUNY Poly and another college in the Mohawk Valley, Elias chose SUNY Poly for its affordability and proximity to home.

“I enjoyed the business. My finances were important to me, and I decided to stay local and not rack up a huge bill for tuition,” he said. “Plus, the campus is beautiful even though it’s close to the city—it’s like a whole other world.”

While an undergraduate student, Elias especially enjoyed learning under Technology Management Professor Dr. Robert Edgell who helped him take classroom material and apply it to real world business scenarios as both a student and, later, a graduate assistant.

“Dr. Edgell took my learning to the graduate level,” he said. “Especially when it comes to experiential learning where it’s all hands-on-deck in a business setting, you learn the complexities of a business. That’s what’s important.”

He earned a bachelor of science degree in Business Administration in 2017 and quickly enrolled in SUNY Poly’s Technology Management MBA program in which, under Dr. Edgell, he assisted in analyzing a local company’s current business structure to help prepare it for future growth.

“What we did was use some pretty sophisticated consulting tools to try to solve some of these problems and uncover some opportunities for Capraro Technologies,” Elias said. “We met with the staff a few times, surveyed them, and we came to some conclusions and recommendations for changes for the organization.”

The skills, knowledge and experiential learning he acquired at SUNY Poly, he said, were crucial in his preparation and play a key role in his parents’ business he plans to someday take over and possibly expand. While he believes things like point-of-service (POS) systems, business strategy, social media advertising and website design are important, Elias says there are a few more factors that are just as critical.

“The high quality of food—that’s from them. The high levels of service—that’s from them,“ he said of his parents. “An MBA from SUNY Poly gave me the knowledge that I need to better understand the complexity in the market place and the tools and skills needed to capitalize on the changes.”

After graduating in 2019 with his MBA, Elias has remained active in campus matters as a member of the SUNY Poly Alumni Association, and he also serves his community as a member of the Hospice & Palliative Care Development Council